An invitation to a newly opened French bistro style restaurant in Delhi, treading cautiously I said yes to give the evening a fair chance after non satisfactory experiences with french food in Delhi. To be honest, after my visit to France earlier this year, I was looking for a fix of some nice french food(not just desserts from school). Attending Chef at Large Delhi Bloggers Table at Le Bistro Du Parc, New Delhi. 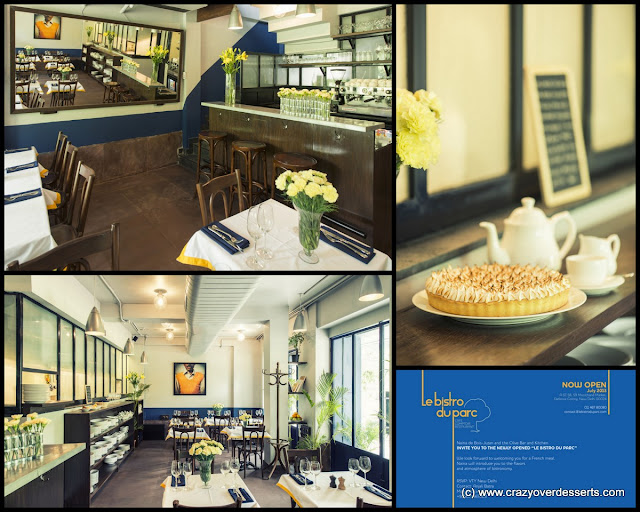 Le Bistro Du Parc is the newest french restaurant in town. Conceptualized by Naina de Bois Juzan(of French and Punjabi origins) and established in partnership with Olive. It embraces the casual and comfortable philosophy of ‘Bistronomy’. Its location is quite central at Moolchand market, facing the park. It has the traditional French Blue and White decor with accents of Yellows and Oranges.
It does have a bistro feel with Naina out in the front help everyone with what to order, managing things and making everyone comfortable. The bistro has 25 covers with a somewhat open kitchen.They are awaiting their liquor license before serving more covers on the first floor. 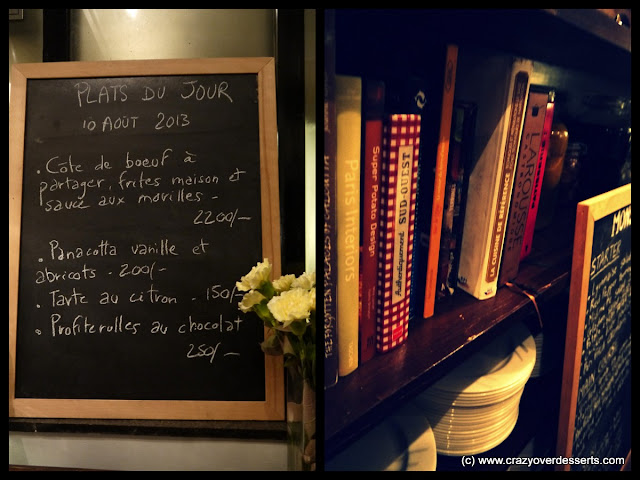 Chef Stéphane Mathonneau, has been trained in traditional and modern French cuisine.  He has worked in hotels and restaurants in London, Switzerland, Sussex, Brighton, Kent, Savoy, Paris, Corsica, Chef Mathonneau has worked in several avatars. He has worked at Corrigan’s Mayfair and Gordon Ramsay’s The Maze, at La Trouvaille (now l’Antidote), Rothschild Group’s L’Auberge de la Cote 2000 and several other restaurants in Paris and London. With a chef like this, I'm looking forward to a very very french meal. 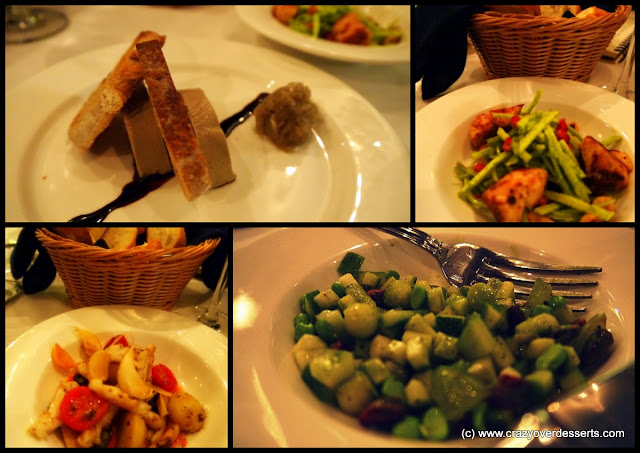 The salad course served was pleasing. The salads were fresh and the ingredients were doing exactly what the chef would have wanted them to do... Appetize and Tantalize....

Salade Céladon Celadon salad is a green salad of fruits and vegetables. The salad had Grape, Pistachio, Green Apple, Zucchini, Cucumber and Green peas with a dressing of Green pea purée and mint oil. Céladon is very French, céladon is from the character named Céladon, who wore pale green ribbons, in the novel "Astree" by Honoré d'Urfé.
Salade Midinette Midinette salad has warm grilled chicken on a julienne of green apple and celery, pomegranate and light parsley mayonnaise. In French, a midinette is female salesperson, a shopgirl, especially in Paris; a vacuous but fashionable young woman.The celery and green apple combination in juliennes gave just the right crunch, bite and flavour. Vegetables cut this way are sometimes said to be “frenched,” and the cut is also known as a matchstick cut, since the vegetables may be cut short so that they strongly resemble matchsticks.
Parfait de Foie de Volaille Chicken liver parfait was served with a balsamic reduction and confit onions. Liver parfait should be rich, silky and meltingly delicious, but somehow this parfait didn't quite measure up for me. It's not really anyone's fault, after having had the meat fruit, a chicken liver mousse made to look like a textured mandarin orange at Dinner by Heston Blumenthal, I wasn't able to enjoy the parfait here.
Fricassee de Calamars Pan fried calamaris were served with garlic, baby potatoes, cherry tomatoes, black olives, red chilly coulis. Fricassee is an old term, dating back to at least the 15th century. It is a French word, theorized to be a compound of the French frire (to fry) and casser or quasser (to break in pieces). 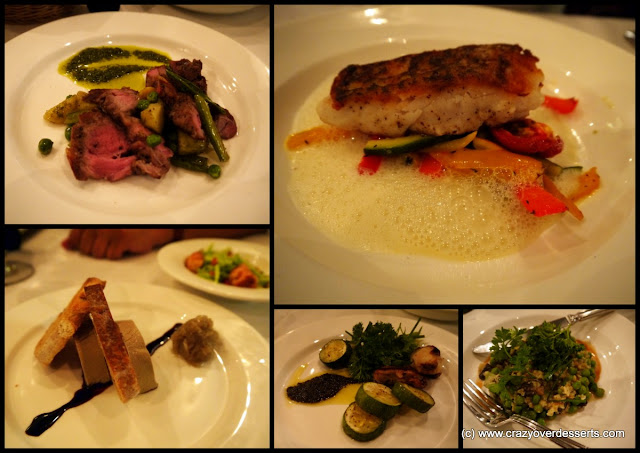 For our main course we had Agneau Grillé, Legumes Verts Grilled lamb leg, green vegetables like
Green peas, snow peas, potatoes, with a mint, coriander and mango chutney.
Volaille Fermiere, Courgettes Roties, Tapenade The marinated chicken, roasted zucchini, olive tapenade was average i would say. Nothing wrong with the lamb or chicken but neither spectacular.
Rouget Poele, Legumes du Soleil, Nuage de Citron Pan fried red snapper, ratatouille vegetables, lemon foam. The fish was cooked just right and the lemon foam complimented all the flavours very well on the plate.
Choux Fleur Comme un Risotto Cauliflower magic risotto Grated cauliflower, cream of cauliflower, green peas and vegetables. No rice!!! This was the one dish that was most disappointing after such a lovely sales pitch. All I could taste was peas, peas and more peas, wish i could find more of the cauliflower to actually taste the risotto in question. 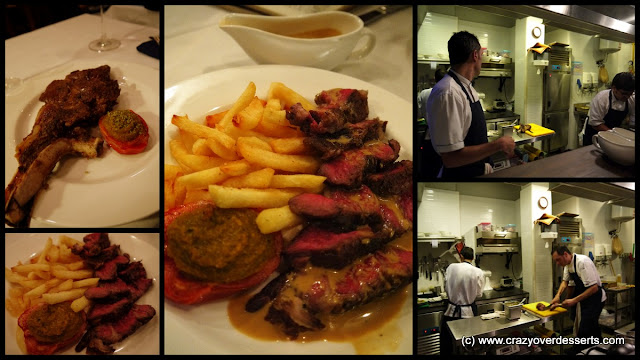 Cote de Boeuf a Partager, Tomates a la Provencale, Frites Maison, Sauce aux Morilles Rib of beef for two, roasted tomatoes, home made french fries and morel sauce was a dish which we discussed and debated a lot on the table. It's a main dish suggested for 2 people. The steak was done on the bone and bought to our table, following which Chef Stéphane sliced it up into smaller portions making it easier for us to enjoy.  The meat was very nice, a little too raw for us at first which was immediately fixed by the Chef. It was succulent, juicy and a great combination with the morel sauce.
The fries... We are all adults, we all know what fried potatoes do to our waistlines..... We ate every single one of what was on the plate, (despite having eaten so much in the earlier courses) is testimony for the fries. All of us clearly enjoyed the morel sauce enough to have asked for more. 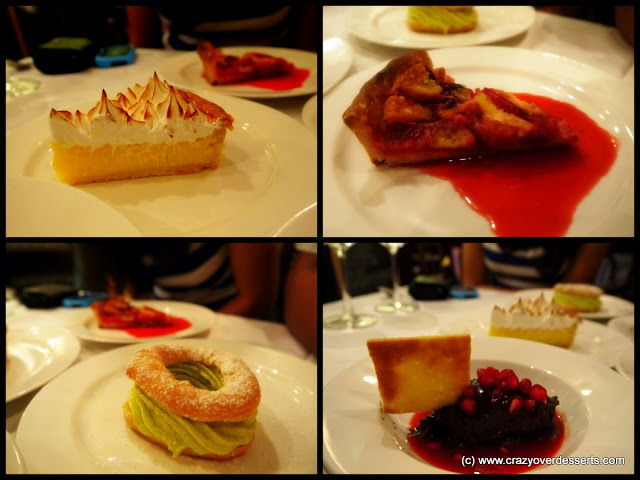 Mousse au Chocolat Chocolate mousse, strawberry coulis and pomegranate was rich, creamy and luscious, complimented very well by the fruit coulis.
Charlotte a la framboise Raspberry Charlotte has the textures executed very well.
Paris Brest a la pistache Pistachio Paris Brest, choux pastry, filled with pistachio home made cream was interesting to see in Delhi but missing some of the bite, for me. This I feel was a function was the very very humid weather in Delhi right now. Any choux pastry product served would not be at it's best.
Tarte aux Prunes et aux Amandes The plum and almond tart was a balance of the tart and sweet, flavours doing the tango in my mouth.
Tarte au Citron Meringuee The lemon tart with meringue was tangy, sweet, creamy and citron heaven. From now on, whenever I don't feel like going into the kitchen yet feel like having lemon tart, this will be the first place I shall turn too.
A little something on lemon tarts and their history with me.... Lemon tart was and is one of my favorite desserts since childhood. On the foodline of Delhi, ever since Nirula's opened.... As kids were were allowed to take home only 1 dessert from the pastry shop... My brother always chose the chocolate tart and I always chose the lemon tart. It had the short crust party shell and lemon curd filling swirled (now I 'm little wiser to know, with the star tip icing nozzle) and no meringue. I made lemon tarts for many people in many variations but the best one hit me in school at Le Cordon Bleu in my basic term as my exam dish.  It was just delicious, I couldn't stop eating it despite knowing how much butter and sugar went into it.... all the calories in the world couldn't keep me from that tart at school.

I just have to go back to the bistro and try the Poire Belle Helene (Poached Pears In Vanilla Syrup Served With Almond Biscuits And Dark Chocolate Sauce), Tarte Landaise (Apple Baked With Brandy, Butter And Sugar, Wrapped In Filo Pastry And Served With A Brandy Sauce) and Crème Brulee A L’anis (Classic Crème Brulee Infused With Star Anis) 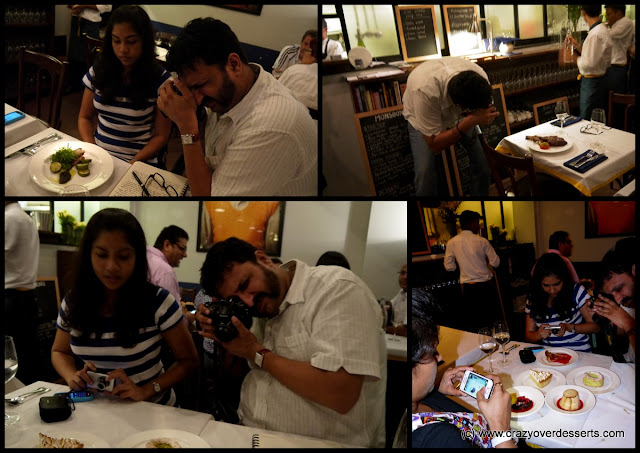 Le Bistro Du Parc for me feels a lot more authentic in it's ambiance, food and culture over the other french restaurants in town, definitely going back for the salads and desserts. The others at the table that night were  Sid of Chef at Large, Charis of Culinary Storm, Sushmita of My Unfinished Life.
Thank you for being such a great hosts Naina and Anjali.
Posted by Nachiketa at 12:04 AM