Chak De and Me

Abhishek….. arrogant vice captain for the Indian cricket team…… telling Preeti, weather u win or lose, you’ll still be my wife….. not that you’ll be the highest scorer and have going crazy over you………

She proved him and lots of others all wrong…….

All thru school I had to grapple with Karate vs Taekwon Do.
Oh! You do karate? The word “Taekwon Do” never registered in people’s heads.

Can u break a table? If you are Taekwon Do champ, break this wall. Can you to a twirling kick in the air? Black Belt, can you fight with 6 boys simultaneously?

My reaction to such pompous asses….. Go take a hike…. You don’t effect us… we have even greater heights to achieve……. Boys vs. girls match
~ There weren’t any girls in our club when I started practicing at some 6-7 years of age…. I use to practice with boys my age. It gave me the advantage which stood me in great strength over the years. I was beaten up but then was tended to with utmost care too.

~ We use to have an event called “Group Sparring”. Any 5 member of a team competed with any 5 members of another team… Height no bar, weight no bar… Gender was no bar till I had entered this competition

Yes, I have made history by fighting a guy in a championship…… obviously I won….. It was difficult….. but it wasn’t sheer strength that won me that match. It was strategy with strength that helped me win. That's Abhimanyu and me

Extremely hard practice sessions…..
This is what one of the sessions did to me but still took part in the championship and came back with a silver medal. Australian Coach: which one of them is didi?????

Arya Menon who played Gul in the movie was someone who embodied “The Chandra’s” syndrome. Our clan comprised of Abhimanyu, Tushar, Nivritti, Chetan and me. The Mehras were also closely linked as they are my Bua’s daughters: Akshita and Amrita. That makes 7 of us.

It was so essential to win… it was expected of you all the time.

Tushar and I sharing a fun moment in This particular match was crazy where I saw blood pouring from my nose……… a rivulet was more like it ;-) Losing….
It’s not that you never lose….. I lost many matches in the beginning of my career to a girl called bindiya….. she was my cross… my albatross….. it just hung on my head. But then you have to come out of it. It’s like being a phoenix… rising from the ashes…..

Something this movie makes you live thru……

There were so many… I now wish I had more pictures and had archived stuff….. Shreya and I
I 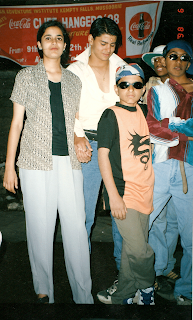 The coach gave each girl the strength to believe in herself and do something really cool for themselves. Everyone had a personal battle to fight…… but they did it with a certain “togetherness”…. Everyone contributed to each other…..

Komal passed the ball to Preeti, who gave the penalty shoot out to Komal. Bindiya came around… Balbir was able to control her temper…. They were doing what a team does…. Play Hockey and nothing else…..

This is something only a coach can do… take all the pressure off the player… all the player has to worry about is playing his/her game.Having a good coach/ manager makes the difference between a match won or lost.
I lost a cherished match against a seeded player in an inter-school only because of this.
Round 1: I was winning cause I was playing better. Half time – our coach gave her a tip….. I couldn’t make out till the end of the match what happened……

Interviews with the press after winning….. Coach: you were all brilliant during selection but now you are all equal and as far as I know, you know nothing about hockey.
~ prove ureself all over again…. Unlearn n relearn to actually learn n advance.
The transition from school champ to noone in LSR was difficult in the 1st year, where each one was a champ in their own space. I had to do it again.

Thank you Rana maam. You are the best. She was just amazing.

Shah rukh khan’s wanton eyes when he sees the field after being appointed the coach…..

~ Whenever I go back to the Talkatora stadium (where most of our championships use to be held) I can feel a tug at my heart.

Throughout the movie, every instance had me going back to 20 years of Taekwon Do…. The tenets of Taekwon Do have been ingrained in us from the very start....

1. Courtesy (Ye Ui)
Taekwon-Do students should attempt to be polite to one another and to respect others. Students should address instructors as Sir and to bow to the instructors before and after classes. Turning up early or on time for classes is also an aspect of courtesy.

2. Integrity (Yom Chi)
One who has integrity is able to define what is right or wrong and have the conscience, if wrong, to feel guilt. Taekwon-Do students should strive to be honest and to live by moral principles.

3. Perseverance (In Nae)
Perseverance means having patience. One of the most important secrets of becoming a leader in Taekwon-Do is to overcome every difficulty by perseverance. Confucius said," One who is impatient in trivial matters can seldom achieve success in matters of great importance."

4. Self-Control (Guk Gi)
Without self-control, a Taekwon-Do student is just like any fighter in the street. Loss of self-control is disastrous both in sparring and personal affairs. "The term of stronger is the person who wins over oneself rather than someone else", Lao Tzu.

Balbir controls herself in one of the critical matches to save the team from loosing a player…..

5. Indomitable Spirit (Baekjul Boolgool)
A true student of Taekwon-Do will never give up, not even when faced with insurmountable odds. The most difficult goals can be achieved with indomitable spirit.

Posted by Nachiketa at 3:47 PM 4 comments: Links to this post

Eggs, Vodka, and a Kiss

Posted by Nachiketa at 12:24 PM No comments: Links to this post