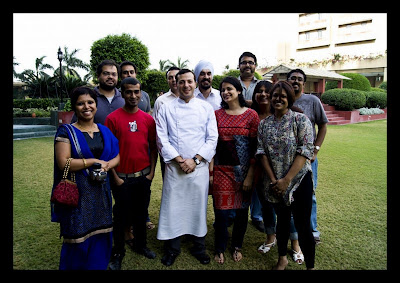 What do you say when a friend invites you out for previewing an Italian Food Festival. You obviously confirm for it and not eat breakfast in the morning ;) We had a great time at Blooms, Eros Hotel managed by Hilton. They are on facebook too http://facebook.com/tabletalkbyeros :)

Met a wonderful bunch of people, Parul of The shirazine, Apeksha of Veggiewiz, Sid of Chef at Large (whose pictures I've used in this post), Gary, Jaspreet, Prateek and Souvik of Belly Centric, Prerna of The Mom Writes and Chef Stefano Nicodemo from Italy (Little birdie who said Italian men are good looking was right ;) )

Pictures and food go hand-in-hand for all of us... We were clicking n eating n chatting.... The best part of eating out with food bloggers is that they understand your need to click pictures of everything before you eat. 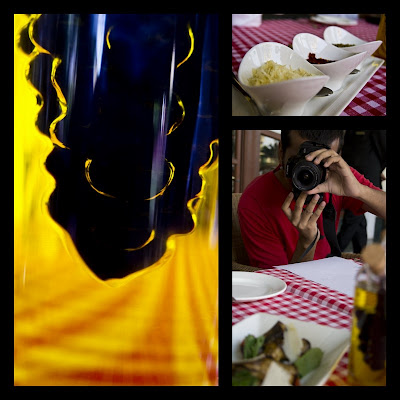 The Antipasti was something which made me not just eat... It made me EAT-MY-WORDS... Being a self professed carnivore... I could swear by the vegetarian fare... If I could be made to take a second helping of Aubergine rolls... Roasted Aubergine slivers stuffed with sundried tomatoes and smoked cheese... It has to be fantastic... I was floored :)
The roasted baby potatoes, and bocconcini with roasted vegetables were nice. The mushroom topped Vol-Au-Vents tasted well, however would have been superb if served warm. 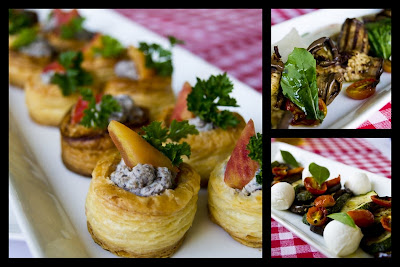 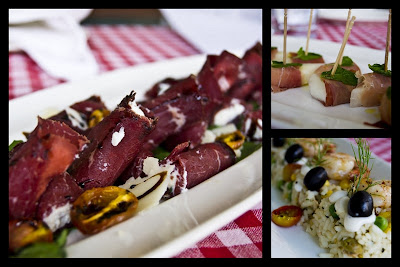 We were served nice champagne and white wine with our lunch.... Isn't that evident with all the glasses around me in the picture below ;) 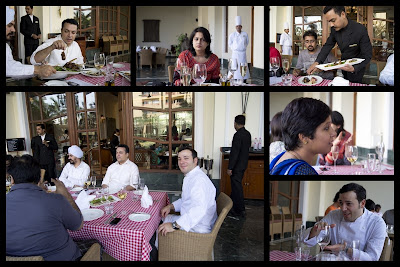 In the main course there was Roasted Rack of Lamb, Pollo al Mattone — Corn fed chicken oven roasted with potato (the caramelized onions with potatoes were extremely nice). Yet again, it was the vegetarian fare which knocked me off my feet. The Spinach Flan with Parmesan Fondue (which we called spinach dhokla in zest) was amazing.... the firm crust yet melt-in-your-mouth insides was really worth writing home about..... The texture and flavour was abundant. The Saffron risotto was made just to my taste... Was again forced to take second helping of the vegetarian fare as it was just delicious. 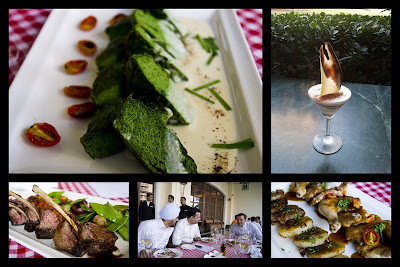 The only thing which I can really complain about was the Tiramisu..... It was just not upto the mark..... Firstly the glass it was served in, then the huge out-of-proportion chocolate decoration. The sponge layer was almost missing and cream layer was over powering. Hardly any alcohol or coffee...
If it was an adaptation, then it shouldn't have been called a Tiramisu.....

Verdict:
We had a good time enjoying some not-so-regular Italian fare. It would have taken them some deliberation to not serve just a pizza/pasta sort of menu for an Italian Food festival, which is admirable. The vegetarian fare was superb. Dessert is not something I'll go back for.
The festival was a good experience over all.
Price:
About Rs. 1950 per head for lunch and two options for dinner — Rs. 2250 (includes one glass of house wine) and Rs. 2750 (unlimited house wine).
Posted by Nachiketa at 11:01 PM No comments: Links to this post