This movie is directed by Karan Johar’s assistant Tarun Mansukhani.
Karan Johar and Tarun Mansukhani do pleasantly surprise us with their new offering - Dostana. The movie scratches the surface of a sensitive topic with comic timing and dollops of laughter.
They have extended the ‘kantaben’ spoof in Kal ho Naa ho and it has been delightfully taken to the next level, that my friends, is Dostana for you.

Coming from Karan Johar’s Dharma Productions, Tarun Mansukhani’s directorial debut is a good mixture of Karan Johar’s stamp of glossy class and a new age director’s hatke treatment.
Welcome to the world of Dharma Productions where opulence rules and even if someone needs to rent out two rooms, the apartment that she lives in even has its private pool! You see she just bought it casually and then realized that there were installments to pay, so.....

Watch the teaser below (courtesy youtube.com)


Dostana also seeks to find an answer to a similar question that has troubled our little globalised and [almost]recession-ridden world – can two guys hugging and hanging out with each other ever be just friends? Because it seems like ‘the sex part always gets in the way.’

What really rocks Dostana is John removing his clothes at the drop of a hat.... ooooooohhhhhh...... aaaaaahhhhhh..... is all we could do in our seats......

It's a refreshing change, that Dostana treats guys like sex objects instead of girls. The body of John Abraham is fully exploited [no one is complaining... The more the better... ;-) ] and I’m pretty sure all the girls loved it after listening to the claps and whistles during the movie.

Watching a movie with friends is really FUN..... we just rolled off our seats laughing... :-) It's a laugh riot. The film is stupid and nonsensical at times, but it succeeds fully in tickling your funny bone!

The first half is a completely funny! Some sequences such as the Venice sequence and Kirron Kher turning up unexpectedly at Priyanka’s house bring the house down! In fact, you’ll find it difficult to stop laughing in these scenes!

I liked the styling in the movie...... all the characters were really looking their part and very very smart....

Priyanka Chopra looks good in the movie. If you thought Fashion was her best thing, think again! Priyanka takes it to whole next level both with her looks and performance. And how can we forget the scene in which she wears Golden swimsuit? I mean, you’ve to see the reaction of boys. Even we girls were whistling and that’s the magic of Priyanka in this movie. I guess lots of credit should be given to her stylist, make-up people n the cinematographer (Ayananka Bose) aswell... ;-)

Abhishek Bachchan is the pick of the actors, no doubt about it. Called on to play an over-the-top pink-loving straight man -- who seems far too interested in pretending to be gay -- He does a spot on job as he stays over the top and ends up being a pretty enjoyable buffoon.

Jumma Chumma dede.... act at Gold Rush.... was just amazing.... what I would give for watching Abhishek do something that like for me.....Muuuuuuuaaaaahhhh.. ;-) 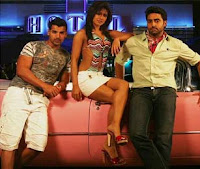 Clearly an actor who likes getting under the skin of his character, this is a role that calls for much self-deprecation and embarrassment, and Bachchan embraces them quite well. I just loved the pink car and all the fun they had while driving around in it.....


Bobby Deol is good and efficient. He's looking so cute :-) Love his smile. He has a major role to play in the 2nd half and does a great job. The kid playing Bobby Deol’s son was cute!

The Dostana Look... Get the inside scoop of Dostana look.

Vishal-Shekhar’s music is already topping the charts and the picturisation of songs take it one notch higher.

The opening track shot on Shilpa Shetty at the beautiful sun kissed Miami beaches provides great eye candy.
The music is peppy and catchy with songs like ‘Desi Girl’ and ‘Maa Da Laadla Bigad Gaya‘ sure to rock the boat. I justlove the 2 songs... They play in my car constantly on repeat mode along with Rock on songs.

Also, what makes Dostana work for me is the sheer chemistry between John Abraham (his lack of expressions notwithstanding) and Abhishek Bachchan. The two seem so perfectly made for each other you begin wishing they were really gay.

However, what is really not happening, is that the makers have managed to totally waste three brilliant actors – Boman Irani, Kirron Kher and Sushmita Bundela Mukherjee. Boman plays the gay editor of a fashion magazine for about three scenes, Kirron plays Abhishek’s ‘full on Punjabi ham scene’ mom and Sushmita is Priyanka’s wannabe model aunt. Would like to ask Tarun Mansukhani just what on Earth was he thinking while picturising that song on Kirron anyway?

Some of the best scenes in the film: (courtesy: Fenil Seta)
1. The songs ‘Shut Up & Bounce’, ‘Jaane Kyun’, ‘Desi Girl’, ‘Maa da Laadla’ & ‘Khabar Nahi’.
2. Abhi and John meeting the landlady for the first time
3. The ‘love at Venice’ scene (brilliant and quite imaginative!)
4. Abhi and John at the immigration center
5. Boman and Kirron at Priyanka’s house (funniest scene!)
6. Kirron cheering up Priyanka (Awwww... So sweet..)
7. John’s wonderful friendship dialogue!
8. The ‘Kuch Kuch Hota Hai’ scene! (Rain n music bit was just too mushy n cute)
9. The scene at the trail room
10. The basketball match sequence
11. The climax (idiotic but funny!)

Verdict – Dostana is an entertainer which you can’t afford to miss. Please don't miss the starting or the ending of the movie [ has 2 hot songs.. ;-)] It’s a must watch for everyone, especially for the teenagers. If you’re fed-up of silly comedies then this movie is a treat for you. These 2 hours and 15 minutes are the ones which you’ll cherish long after watching the film. DOSTANA rocks… have a blast!As we say in our Bollywood style, “Dostana is a Full Paisa Vasool film.” Highly recommended!


Since we tend to forget the people behind the scenes..... Here's what I could find....

Gr8 blog entry - it all rewinds back when i read d blog - each n every scene.
Hilarious! u have to leave ur mind home to enjoy dis one. :D

Nice review...yeah the movie is quite enjoyable!..for a change the guy was the one who was dropping the shirt on every pin that down..:))