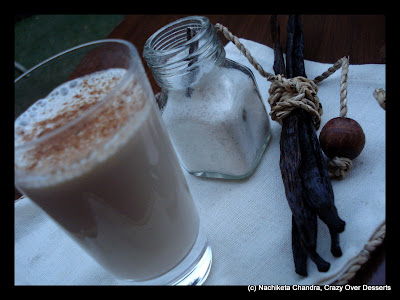 Imagine baking without vanilla.
Vanilla extract isn't something you get in regular stores in delhi. What you get is vanilla essense, nothing against it... have been using it for the last 2-3 years but then I found these vanilla beans in INA market and just had to pick them up. Vanilla was once so rare and expensive that only royalty had access to it. I feel like royalty now. So how do I treat a princess..... make her some Vanilla Sugar so that all my desserts now become royal..... 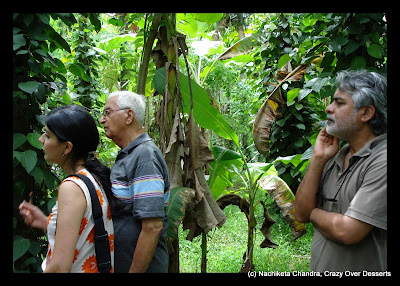 I had seen a vanilla plant for the first time in Goa at a herbariam while holidaying. During that season they were ripe and green while hanging from the plant. Their aroma was divine even while it wasn't fully ripe. The word "vanilla" comes from the Spanish word "vainilla" which means little sheath, referring to the pod's long thin shape.[Source: www.joyofbaking.com]
Vanilla is sold in different forms like extract and essence, pods (beans), powdered, and vanilla sugar.

vanillabeansguide.com has a detailed article about how to find the best Vanilla Extract around.

Vanilla sugar can make a fun gift when paired with a homemade hot chocolate recipe and/or a homemade hot chocolate mix. A cute container, a ribbon, and a label or nicely decorated recipe card is perfect for a simple holiday gift. Diabetics should be upset after reading their post... There's SugarFree Vanilla possible. Check it out here. You can use it exactly like you would Vanilla sugar. 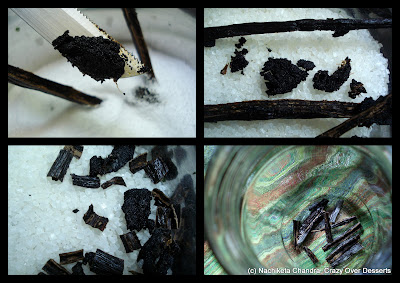 Method:
1. Scrape out the vanilla seeds(caviar) from the pod and add it the sugar.
2. Cut the scrapped vanilla bean into smaller pcs and add to the sugar
3. Run the sugar in the food processor till it's finely ground.
4. Incase you have uneven grinding, just run the mix thru a sieve and process the course bits again.
5. Store in airtight container for at least two weeks before using. 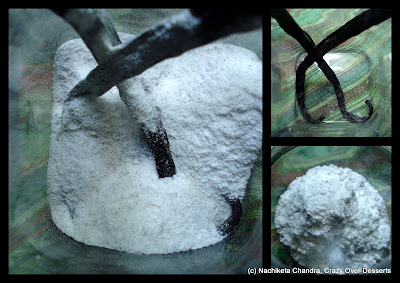 I've sprinkled Vanilla Sugar on fruit, cookies, cakes and even added to teas, coffee, desserts and it works like magic. Use it to top anything you would usually use powdered sugar for even in icings, glazes etc. (if you don't mind the specks of vanilla in it) 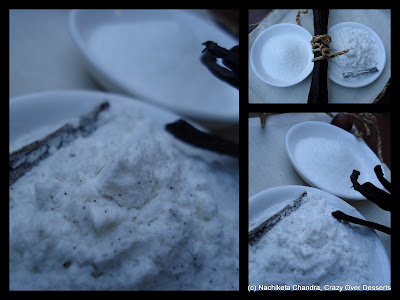 Vanilla Extract (homemade) :
Soak 2 vanilla beans in 180 ml of Vodka and leave it to mature for 6-8 weeks, shake it every few days. For quick action, scrape out the vanilla seeds(caviar) from the pod and then soak the beans
As the homemade extract ages the liquid will darken n pieces of the vanilla will settle at the bottom of the jar. 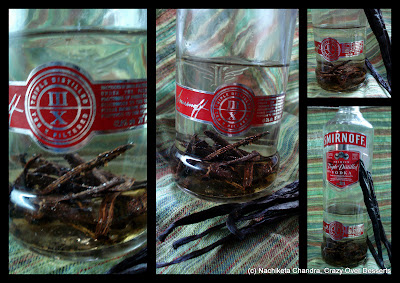 Why Vodka and not some other alcohol?
The answer can be found here. Essentially, higher proof of alcohol = stronger extract. Vodka has an alcohol content of 40 to 50%. Cheap cooking wine or rice wine, on the other hand, have an alcohol content of about 15 to 25%.
* In order to get the strongest extract possible, use a high proof of alcohol and scrape the seeds from the pod (or split the pod open).
* To get a weaker extract, use a lesser proof of alcohol and soak whole pods intact.
* In addition, corn syrup or sugar helps extract and develop the flavor from the vanilla pods (corn syrup dissolves more easily).
* Occasionally, spoon out some of the mass of vanilla pods that settle to the bottom of the jar for when you want a very intense vanilla flavor (such as homemade vanilla ice cream or butter/vanilla pretzel cookies).
All the above useful tips and more, can be found at this site tipnut.com. 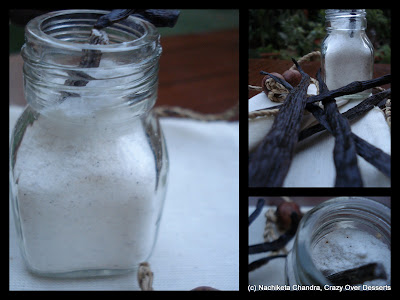 Storing Vanilla
Keep vanilla extract in a cool, dark place, with the bottle tightly closed, to prevent evaporation and loss of flavor. Vanilla extract has an indefinite shelf life.

Starter brew bottles make great gifts for friends who bake. Include the basic instructions and a few extra vanilla pods in case they want to make an even stronger extract or wish to make some vanilla sugar on the side. 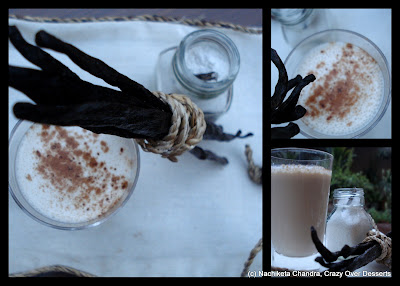 Posted by Nachiketa at 3:29 PM

Awesome!!! Isn't it great to make our own extract at home? It sure feels like luxury!!

That vanilla sugar sounds great and am gonna make it too! Thanks for all that info gurl!!!

What a great idea for making your own vanilla sugar and extract! I'll have to research where to get whole vanilla beans in my area (bay area, California).

For recipes that call for vanilla extract, can you use vanilla sugar in place of regular sugar to enhance that flavor or does it not make much of a difference? It vanilla sugar used more as a garnish?